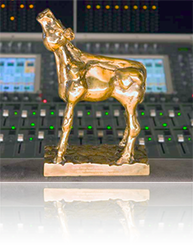 We Have 3 studios/editing suites, all around a central equipment room. The big Studio is 85m2, has a big screen with laser projector. This studio is multifunctional, it can be used for sounddesign, editing, and mixing. Also the room can be used for ADR recording - matching with location sound can be well achieved. The two smaller studios are for sound editing and sound design. There is a large  sound fx/ambiance library, an important part of it is personally recorded, edited and transferred to harddisk.

We use Pro Tools  for editing & mixing. There are several editing sets linked by gigabit network. The big studio is equiped with Meyer Sound screen speakers & sub. Surround speakers are QSC . The audio is transported over an AES67 audio network. Converters are Merging Anubis & Horus. The listening environment is controlled by a Datasat AP20, . Picture is usual on Pro tools or Video Slave. With the  HD 8000 Ansi Lumen Projector and the 5 meter wide screen you can have quite a cinema feel, right in the editing stage!. For backwards compatibility we have still Merging Pyramix available.